The Braddon Streetscape Upgrade project excluded cycling. The Haig Park Footpath and Lighting project lacks cycle infrastructure, too. Upgrades to Northbourne Avenue last year were bicycle free. End of journey facilities Draft Variation No 357 went missing in 2019. The City And Gateway Urban Design Framework (December 2018) was filed away and forgotten. Cycling is the Cinderella of transport – we are still waiting for the Fairy Godmother. We were pleased to finally see some progress for cycling with today’s tender 30864-RFT-001 Garden City Cycle Route Project Brief Design.

The article on the City and Gateway Urban Design Framework can be read here.

Good ideas that were never built

The Garden City Cycle Route was identified as a priority back in 2004 and added to the Ten Year Master Plan Trunk Cycling and Walking Path Infrastructure. The idea is not new and neglected for almost 20 years. Keep in mind that we have had a Labor government in the ACT Legislative Assembly since 20 October 2001. 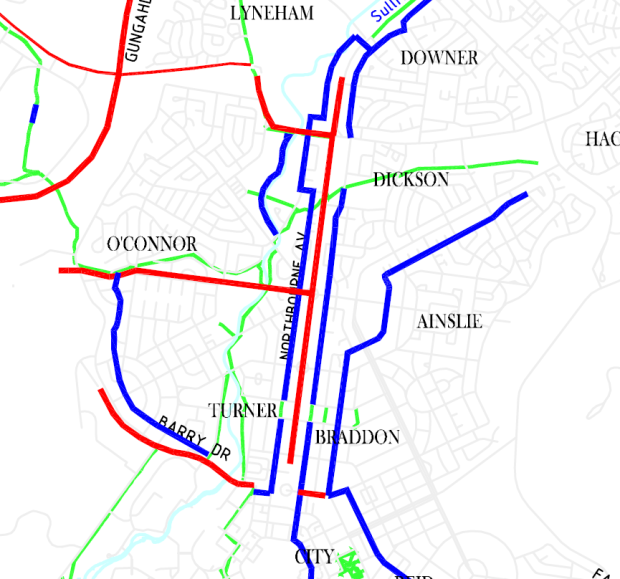 The Garden City Cycle Route would cover over five kilometres across the inner north, with cycle connections, travelling through the suburbs of Watson, Downer, Dickson, Ainslie, Braddon, and the City. The cycle path would include a mix of off-road shared paths and protected on-road cycle lane, and be in direct proximity to approximately 17,000 homes in the inner north corridor.

ACT Infrastructure Delivery Partners (IDP) released the tender 30864-RFT-001 Garden City Cycle Route Project Brief Design on 25 February 2022 (the document is strangely dated 30 July 2007). This finally moves the project to the next stage and defines the scope of work as:

The planning of the Garden City Cycle Route is a multi-step process. After the Preliminary Sketch Plans follows detailed planning. After that, the construction work will need to go to tender. Bikeways tend to be built in stages. Belconnen Bikeway started construction in 2019 and stage 2 starts in 2022. The reasons for this are obscure and may include lack of planning resources within TCCS and minimal funding. Whatever the reason, it certainly takes longer to complete.

Considering all these factors, average project delays (6 months) and past cycle infrastructure rollouts, would suggest the Garden City Cycle Route should be finished around 2028.

The rollout of cycle infrastructure is painfully slow. Due to top down change sponsorship cycling is still not taken as seriously as it should be. If you would like to see what is happening in more enlightened states of Queensland and Western Australia, check out the Austroads Webinar: National Walking and Cycling Participation Survey 2021.